Just a quick reminder that the deadline for receiving the Bonus Material Pack is fast approaching!


Anyone who wishes to receive it (includes a deleted scene from Savage Urges, a Behind the Book commentary, a short story for Jaime and Dante, and a sneak peek at the second in the Mercury Pack series, Force of temptation) just send proof of purchase of Savage Urges – a receipt, email order confirmation, or a snapshot of the book in your library – to my assistant at askmelissa@outlook.com 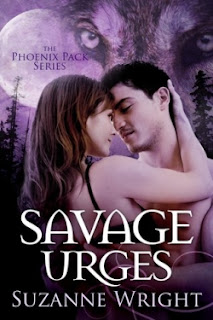 Cant believe the day is almost here! This is the fifth book of the Phoenix Pack series and tells Ryan's story. I’ll include the synopsis and an excerpt in this post so you can take a peek. I’ll be celebrating on Facebook tomorrow, so I hope you’ll come. There will be giveaways and a chance to receive bonus material. I like to do giveaways, but it seems sad that so many people get involved and only a handful win something. As such, I’ve created a Bonus Material Pack. It contains a Behind the Book commentary, a deleted scene, a short story for Jaime and Dante, and a sneak peek at the second instalment of the Mercury Pack Series, which will be released in autumn. The Bonus Material Pack will be available for the first week of the book’s release. To get it, all you have to do is send proof of purchase to an email address that I will post on Facebook tomorrow morning. 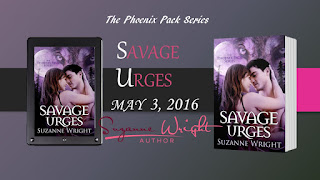 Here’s the synopsis for Savage Urges...


She’s a lone wolf with a cause.


As a volunteer at a shelter for lone shifters—the same one that rescued her—Makenna Wray has dedicated her life to finding homes for its residents. And when she discovers that a teen in her care is related to Ryan Conner, the broody, handsome-as-sin enforcer of the Phoenix Pack, she’s eager to help connect the two. She just wasn’t prepared to feel a connection of her own.


Lone wolves are loners for a reason—and most of them bad. Or so Ryan assumes until he meets the mysterious Makenna. Quirky and sensual, she seems to enjoy riling him, especially when she refuses to discuss her past. Although there is no mating bond, he’s sure she’s the one. All he has to do is be patient and wait. But when another pack’s sinister Alpha comes sniffing around, threatening Makenna and her shelter, this enforcer is ready to let his wolf off the leash…


Read on to check out an excerpt of the book…


Stalking people was so boring.


At least the view was attractive. Smoky black eyes, a strong jaw, broad shoulders, and impressive abs that she could see right through his dark-gray tee. The angles of his face were hard, rough, and dangerous, matching his menacing frown. He was incredibly hot, if you liked the broody, rugged type, which Makenna totally did. Especially when that male exuded strength and confidence with every step he took.


Whenever she found potential guardians for loners, she researched them, scouting the Internet for information and asking questions of her many sources. The guy was a respected enforcer within a powerful pack and was well known for being a seriously talented tracker. All good things. He’d been described as stoic, dauntless, cold. But Makenna often had feelings about people—she was good at reading them, good at seeing past masks and shields—and she had a very good feeling about Ryan Conner.


Since she had more chance of talking with him in a public place than being permitted on his territory, she’d followed his Chevy to a small line of stores in town. And now, parked at the far side of the lot, she watched impatiently as he stood by his car talking on his cell phone. Her plan was pretty simple: the moment he put away his cell, she’d approach him, introduce herself, explain the issue, and . . . and now he was walking away.


She grimaced as he disappeared down an alley, out of sight. Crap. Could nothing be simple anymore?


Hopping out of her Mustang, Makenna crossed the lot, traced the path he’d taken, walked into the alley, and—


Where the fuck had he gone?


She moved a little farther into the alley, stepping into the shadows. It was empty. Well, that was totally shit. Now she’d have to—


A large, warm, calloused hand suddenly curled around her throat from behind as a solid body propelled her forward, caging her against the brick wall; the rough surface grazed her palms.


A hot mouth was then at her ear. “Why are you following me?” It was a menacing rumble.


And just like that, at the feel of his breath against her ear and the sound of that gravelly voice, lust slammed into her. The reaction was instant, elemental, and totally unwanted. Sometimes being a naturally sexual creature was very inconvenient. “You know, there aren’t many people who can creep up on me. You’re good.” He hadn’t made a single sound. Makenna was good at stealth, but not that good.


For a moment, he didn’t respond, and she had the feeling she’d surprised him. He grunted, “Answer my question.”


Did he think that gruff tone would scare her? It probably should. Especially since she had well over six feet of untamed power practically curled around her from behind. With her slim build fitting into the groove between his broad shoulders and her head resting just beneath his chin, she felt totally surrounded.


Her wolf should have felt threatened. She didn’t though as she was a little distracted by the dark animal energy that hummed beneath his skin and his delicious scent: rich hazelnut, smoky sandalwood, and a dark sexuality. Makenna could admit it was rather distracting. “Sure thing. But I’ll need you to release me first.” In truth, she could easily escape his hold. But it would serve her best to let him believe she was helpless.


“I’ll release you when you answer me.”


“So talk.” His thumb circled her throat in a movement that was surprisingly arousing.


“Who sent you? What pack are you from?”


If she revealed she was a lone wolf this early in the conversation, she’d most likely be sent on her way. “Nobody sent me. I just need to speak with you.”


A pause. “You have five minutes.”


“I mean you have five minutes to convince me not to snap this pretty little neck.” He punctuated that with a flex of his grip.


She sensed that he wasn’t kidding. Well, of course he wasn’t. She was a perfect stranger, she’d been following him, and he had all the instincts of an enforcer. A threat to an enforcer was a threat to their pack. As such, they would never hesitate in eliminating one. “Hey, if you really want me to walk away, fine. But then you’ll never know what was so important to make me trail you like this.”


“Damian Lewis was your cousin. Correct?” He didn’t respond, but she knew she was right. “As I’m sure you know, he died six years ago. His mate died shortly after, unable to survive the breaking of the mating bond, leaving their son to the care of their pack.” She licked her lips. “Zac left his pack six months ago, and he point-blank refuses to return. He’s been staying at a shelter for loners for the past four months.” Ryan still said nothing. “Are you going to let go of me now?”


“No.” He circled his thumb over her throat again, increasing the buzz of arousal beneath her skin. “What does this have to do with you? Are you from his pack?”


As his grip tightened—not enough to hurt but enough to reassert his dominance—Makenna sighed. “Okay, I get it. You’re a big, bad, scary wolf, and your proverbial dick is bigger than mine. I’m officially intimidated.”


His mouth moved even closer to her ear, until he was almost nibbling on her lobe. “That’s a lie. I don’t like it when people lie to me. Don’t do it again.”


Have a great day!
Posted by Suzanne Wright at 07:14 No comments: