Calling all fans of the Phoenix Pack...

Hey everyone, hope you're all doing great. I finally got the go-ahead from the marketing team to release the synopsis for 'Carnal Secrets', the third book of the Phoenix Pack series (yay!) which will be released Feb 11, 2014. The cover should also be coming in a few weeks and I absolutely can't bloody wait. Once I have it, I'll put it up here. Anyway...here's the synopsis, enjoy:

A pack Alpha and his estranged, true mate wrestle with painful secrets, ruthless enemies, and their own irresistible attraction, in the sexy third book of the Phoenix Pack series.Half-shifter Shaya Critchley may hold a submissive role in her pack, but she’s done taking orders. After her Alpha wolf mate refused to claim her—but committed to interfering in her life—she took off. Now she hides from him, posing as a human in a town full of anti-shifter extremist groups. She thinks he’ll never find her again, and that suits her just fine. But she’s wrong.

Nick Axton can barely control his feelings for Shaya, but he could never claim her—not if he truly cares for her. The degenerative brain condition he keeps secret would ultimately leave her with a burden rather than a mate. But when Shaya runs away, Nick can’t bear the thought of never seeing her again. After tracking her down, he discovers Shaya’s feisty and passionate side in the process…a side he’d never seen before.

Under the menacing gazes of territorial local packs and violent human extremists, Nick vows to finally claim the spirited Shaya…and despite her initial resistance, Shaya just might find his fiery determination to be the ultimate aphrodisiac.

I'm happy to tell you that book 3 of the Phoenix Pack series has been given an official release date: February 11, 2014. Although it was originally titled 'Tremors of Need', my Editor and I discussed changing it to a two-word title to match 'Feral Sins' and 'Wicked Cravings'. The new title is 'Carnal Secrets'...and I'm so bloody excited. For those of you who have expressed an interest in pre-ordering it, here is the link: http://www.amazon.com/Carnal-Secrets-Phoenix-Series-ebook/dp/B00E8PUYEU/ref=sr_1_2?s=digital-text&ie=UTF8&qid=1375697379&sr=1-2&keywords=carnal+secrets. There is no book cover just yet, but it will be coming soon. 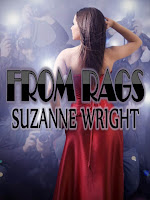 Also, 'From Rags' has been officially updated on Amazon so that it is free of grammatical errors. It means that anyone who bought it prior to the update may be contacted by Amazon to ask if they would like to have their version updated. If you don't hear from Amazon, feel free to contact them about it. I've also edited the cover slightly to make the title clearer.

In addition, 'From Rags' will be available in paperback format very, very soon on both Createspace and Amazon. I currently have the sample in front of me to read through and proof. It's going to be a long but very fun day.