'BURN', the first in my new The Dark in You Series, will be released in just six days! Time has flown! It follows the story of demon Knox Thorne, who was featured in 'Consumed.' 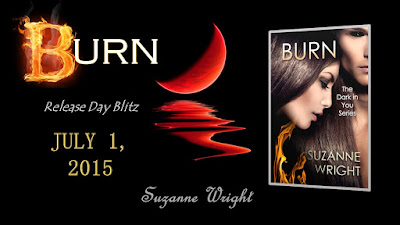 
Part of a small demon lair in North Las Vegas, tattooist Harper Wallis lives a pretty simple life. That changes overnight when she discovers that her psychic mate, or ‘anchor’, is a guy who’s rumored to be the most powerful demon in existence. Compelling, full of secrets and armed with raw sexuality, Knox Thorne is determined to claim her as his anchor, creating a psychic bond that will prevent their inner demons from ever turning rogue. The billionaire also wants Harper in his bed. She’s not so sure she wants either of those things. No one seems to know what breed of demon Knox is, only that he’s more dangerous than anything she’s ever before encountered. But he refuses to walk away. And when an unknown danger starts closing in on Harper, it seems that Knox is the only one who can keep her safe.

As Prime of his Las Vegas lair and a successful businessman, Knox Thorne is used to being in control. He’s also used to people fearing and obeying him. Harper does neither, which unexpectedly amuses him. Unpredictable, elusive, and complex, she draws Knox and his inner demon like nothing ever has. Knox is used to getting what he wants, and he wants Harper. He’ll have her, and he’ll keep her safe from the threat that looms over her. Because Knox protects what’s his. He won’t allow anyone to take her from him. Even if it will mean letting the demon inside him rise and wreak the havoc it was created to make.

If you're interested, here's an excerpt from chapter one:

Inhaling deeply, Harper slipped inside…and found herself fighting the urge to stare in awe at the tall, imposing figure standing behind a glass desk. Deep-set dark eyes that matched the color of his hair locked on Harper, and the intensity there rocked her. Her body instantly responded. Molten lust licked at her, making her breasts ache, her nipples harden, and every inch of her skin suddenly feel hypersensitive. Well, shit.
All demons had natural sex appeal, and she’d heard that Knox’s effect was more potent than most, but Harper still hadn’t been prepared for the sheer impact of him. He radiated alpha energy, projected a raw sexual magnetism that would make any girl sensually starving. As she took in his bold stare, powerful stance, and air of self-possession, lots of words came to mind: Powerful. Forceful. Confident. Controlled. Dauntless. Determined.
Damn if it didn’t make him intimidating.
Refusing to buckle under the force of it all, Harper shut the door and waited. He said nothing. Didn’t greet her. Didn’t invite her to sit. Just stared at her with that dark, penetrating gaze that was sizing her up, and the atmosphere seemed to thicken with tension. But there was no chance that she would avert her eyes. This was a test of her strength, and she wasn’t prepared to fail it.
Finally, looking like he’d just stepped out of a GQ magazine, Knox slowly rounded the desk and walked towards her. No, walked wasn’t the right word. He breezed, glided – moved with an animal grace that demanded attention and could easily keep it.
Her inner demon froze, feeling threatened by this male that exuded danger. And he was dangerous – it was apparent in the way he moved, in his posture, in the tension coiled in his muscles that rippled beneath his black suit. She would bet that suit cost more than her entire wardrobe.
“I’m Knox Thorne.” He tilted his head, those dark eyes still locked on her. He was even more imposing up close. “And you are…?”
“Harper Wallis.” It worried her that he unnerved her demon, who was rarely rattled by anything. To Harper’s utter frustration, she couldn’t get a read on him, couldn’t identify what breed of demon he was. But every instinct she had told her to tread carefully; that she was in the presence of a very powerful predator.
“Harper Wallis.” He didn’t say her name, he tasted it. Tasted it with a voice that was like smoke, whiskey, and velvet. And Harper knew she’d be entertaining some seriously dirty fantasies about him later. She sure hoped he couldn’t read her thoughts – now, that would be embarrassing.
She wasn’t offended when he didn’t hold out his hand to shake hers. Demons were tactile, psychic, sexual creatures, but they were also very selective in who they gave permission to touch them. “Nice to meet you, I guess.” She didn’t sound at all genuine. And for some odd reason, that made his mouth curve into a crooked smile which caused her libido to do the fandango. Great.