SPIRAL OF NEED HAS FINALLY BEEN RELEASED!

RELEASE DAY IS HERE!
Spiral of Need, the first in the Mercury Pack series, has been released today! 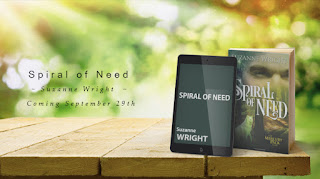 If you're interested, read on for an excerpt from chapter one:

Nothing like being accused of attempted murder to complete a girl’s Friday evening.


Alyssa “Ally” Marshall kept her expression carefully blank as she stared at the two wolf shifters sitting across from her. For at least an hour the enforcers had kept her detained in an empty room of the pack house before finally joining her, only to look at her as though she were a perfect stranger as opposed to one of their pack mates.


She knew why they had left her alone for so long. Shifters didn’t do well with enclosed spaces. Placing her in a small room, bare except for three chairs and a desk, was obviously supposed to increase her discomfort and make her wolf feel trapped and isolated.


It worked, but Ally had fought hard not to show it. Fought hard to keep her pacing wolf from losing her shit. And fought hard to suppress the memories of the last time she’d felt so trapped.


Then the mind games had begun.


First Greg and Clint had tried the good cop/bad cop routine, which she’d found rather insulting to her intelligence. So while Good Cop Greg had done his best to convince her that he was her savior and Bad Cop Clint had been browbeating and antagonistic, Ally had remained calm as she firmly stated the facts.


Instead of listening to what she had to say and considering her side of the story, they had tried twisting her words. And she’d quickly realized that they hadn’t brought her into this room to hear her version of the events. They had already made up their minds that she was guilty; what they wanted was a confession.


At that point, she’d demanded that they summon their Alpha but was told that Matt was talking with Ally’s supposed victim and wouldn’t be joining them. That was when Ally turned silent. She wasn’t going to give them anything more to use against her. No matter how much psychological pressure they put on her, Ally refused to crack. She didn’t flinch, she didn’t lose her temper, and she didn’t evade eye contact. As they stared at her, she stared right back. Her wolf approved of her resilience, though the animal would find much more satisfaction in scalping the bastards with her claws. It wasn’t a bad idea, really.


Greg had then turned from good cop into frustrated-as-all-shit cop, sighing and growling. And Clint had gone from bad cop to on-the-verge-of-snapping cop, slamming his hands on the table and aggressively invading her personal space. Ally was the only one in the room projecting an outward calm . . . and that was just irritating them even more. How grand.


“Do you have any idea how bad this could get for you, Ally?” Greg leaned forward. “Matt is going to be supremely pissed. You’re facing an execution here. Tell us the truth, and we can help you. We’ll reduce the penalty to banishment from the pack.”


She snorted. Even if they did want to help her, they didn’t have the authority to decide penalties.


“Continuing to maintain your innocence is pointless,” stated Clint, rising from his seat. “We have evidence”—no, they didn’t— “and we have witnesses.”


What they had were the words of some asshole kids who had been detained in this room more times than anyone could count.


Greg folded his arms across his chest. “You said those boys approached you.”


No, she hadn’t. She’d said they surrounded her when she left her cabin mere seconds after she’d realized that not only had someone broken into the cabin while she was gone, but they had totally ransacked it.


Greg went on. “You also said you’re certain that those boys made a mess in your home.”


Personally, she wouldn’t call breaking her furniture, slashing her clothes, spray-painting insults on her walls, smashing her TV, and slinging the contents of the refrigerator around her home a mess.


“But according to the eight youths, they were just hanging around, minding their own business, when you came at them and accused them of breaking into your cabin.”


Which, of course, was a load of cock and bull.


“They claim that they assured you that they weren’t responsible for the damage.”


Another lie. In truth, they had delighted in confessing their involvement when they crowded her, laughingly informing her that Rachelle had put them up to it. And who was Rachelle? Only the delegate of Satan. She also happened to be the pack’s Beta female.


“They insist that you refused to listen, that you persisted in accusing them of breaking into your home at Rachelle’s request. Then you stated, ‘I’m going to kill her!’ before running off.”

Had Ally thought the words? Multiple times. Had she spoken them aloud? Not even once, because Ally didn’t bother with threats or warnings. She much preferred to challenge her foe, get the fight over with, and then go on about her day. But she’d resisted the urge to challenge Rachelle for several reasons— mostly because it was exactly what Rachelle wanted. Ally had no intention of giving that crazy heifer anything.


Clint came to Ally’s side, resting his hands on the table. “You say that you headed for the pack house, looking for Matt, only to find that the place was empty. But, see, I don’t buy that, sweetheart.” His eyes drilled into her as his upper lip curled. “I think you knew that our Alpha would be of no help to you, knew that he would take Rachelle’s side over yours.”


Only one thing about his theory was true: Matt probably would take Rachelle’s side.


“So then you decided to take the matter into your own hands, didn’t you?” Clint’s voice turned harder, louder, browbeating. “You did exactly as Rachelle claims: you tracked her down and attacked her from behind, slashing her back, giving her no chance to defend herself.” He slowly stalked to Ally’s other side as he continued, “She quickly righted herself and whirled on you, didn’t she? That was when you sucker punched her, knocking her out, and ran like the coward you are.”


Her wolf growled, insulted by the “coward” comment. Ally wanted to snort. If she’d wanted to kill Rachelle, she’d have gone at her from the front. And she’d have made sure she finished the job. Since she’d joined the Collingwood Pack two years ago, Ally had only been involved in two duels. Both times, Ally had won. She fought hard and dirty, but she did not attack from behind. And she did not run off like a coward. No self-respecting dominant wolf would.


“You were jealous because you lost Zeke to her,” charged Clint with a taunting smirk, “and you thought that if she was out of the picture, you would get him back.”


Even if she had wanted Zeke back, killing Rachelle wouldn’t have achieved it. Since it was rare for shifters to survive the death of a mate, Zeke would most likely have died right along with her. As such, Clint’s allegation couldn’t be more pathetic. And because Ally had a terrible habit of accidentally speaking her thoughts aloud, she mocked, “Wow, you cracked this case wide open.”


Clint flushed from the neck up, but after a moment he gave a careless shrug. “It’s your word against Rachelle’s.” His tone made it clear that Ally’s word meant jack shit. Unfortunately, that was true.


The past few months had sucked big-time. It had been a blow when her boyfriend found his true mate, but Ally was happy for Zeke. She had been nothing but welcoming and respectful to his mate, but the female had loathed her from minute one. Ally had felt the hate pouring from her in waves—literally. Being highly empathetic came with the Seer package.


Her intuition had told her that Rachelle Lavin was going to be trouble . . . and it had been right. Despite Zeke not hesitating to claim Rachelle as his mate, the female had immediately embarked on a hate campaign with Ally as the target.


Ally had been shocked when Zeke berated her a few months ago for supposedly insulting his mate. Confused and riled, she’d sought out Rachelle . . . playing right into the woman’s hands, she later realized. Everyone had witnessed her yelling at her Beta female, who had remained calm and cool as she rebuked Ally and gave her pitying looks for her “jealousy.”